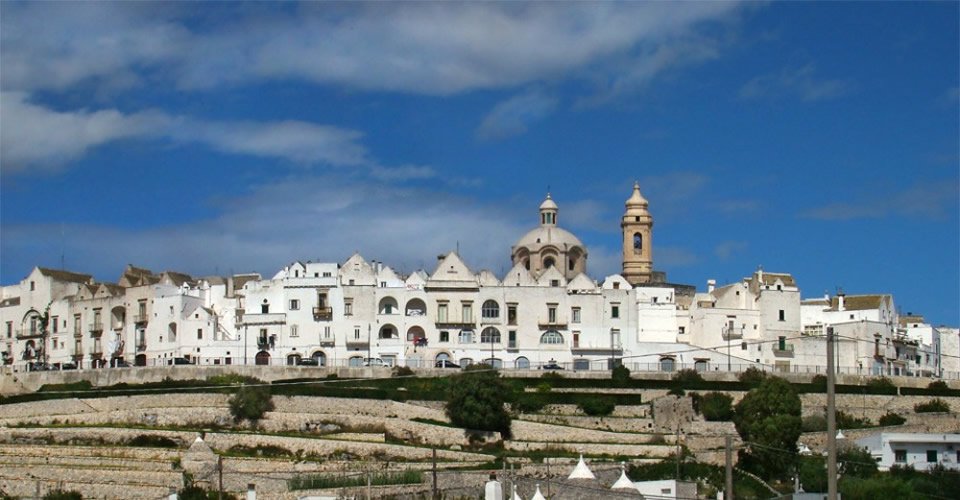 The town of Locorotondo was born around the year 1000. It was originally located at the foot of the hill, but later developed on top. It was expanded, in fact, after a miracle of St. George the Martyr as the people built a chapel in the beginning of the seventeenth century, proclaiming him the town’s patron. In 1645 there was the first edition of the Gift, a ceremony that until the last century consisted in the delivery of a candle and a wreath of flowers to the Sacred Image of the Holy Patron; then the gift was changed in the gold keys of the city and to this day they are delivered to the Saint every 22 April. The current majestic mother church was built over the ruins of the chapel of the Saint and has been dedicated to him as well.

Subsequently great devotion was expressed against San Rocco thanks to the fact that he liberated the people from the plague. Around 1700 he was dedicated to a precious statue built with the offerings of the people and a few years later they built a new church. In 1787 he was proclaimed the first patron saint and in 1897 they started the San Rocco Fair, among the oldest in Apulia, which is held today every year on the patronal feast days. On the same days it takes place, since 1957, the pyrotechnics race dedicated to the saint.

Also important it is the cult of the Madonna della Catena that was born as a result of the discovery of an ancient painting, in the countryside of the town, about the Virgin Mary, surrounded by chains, and with marks of a chain in her hands. A few years after the discovery of a church was built in the countryside where it was found the picture and then the church was known as Minor Basilica of Mary S.S. Chain. The cult of the Virgin Mary then joins with that of the Saints Cosma e Damiano, thanks to the strong devotion of the neighbors in Alberobello.